Posted by Melissa Fitzgerald on July 29

We had a fantastic day of competition today! Day three has the most points on the line for the teams and has historically been a game-changer for many teams with two extremely critical events, Mountain Relay and Rope Burning. These two events are the two most traditional events of Color War that were a part of the very first Color War in 1964.

The Mountain Relay is a giant race that includes 57 challenges and involves over 70 campers from each team. The difficulty is completing your obstacle while still holding the baton. These batons were made in 1976 and have been used in every Mountain Relay and Carolina Streak for 45 years. Campers pass the baton to a teammate at the next obstacle which include shooting five blocks of wood at riflery, promenading your partner down to the gym, carrying a cinder block from the office to the gym, walking like the statue of liberty with toilet paper and a plunger, kayaking around the island on silver lake, blobbing a teammate to swim to the beach, passing a frisbee, saying the alphabet backwards, walking downhill with a book on your head, mini rope burning, driving a nail and many more. This event is so intense because it only takes one hurdle to slow you down and change the fate of the competition.

Today the Blue Knights and the Red Dragons were taking turns at first position, and continued to go back and forth for the lead until mini rope burning at the end of the race, specifically number 53 of the 57 challenges. Both teams were struggling with the wind and getting their fire to first start and then burn in the right direction. The Blue Knights had their rope collapse first and off she went to pass the baton. The Red Dragon camper got stressed and overwhelmed when the Green Giant said to her, “Take your time. The race is not over. Anything can happen. Just do your best.” The next 3 challenges went off without a hitch. However, the final challenge of the event is hammering a nail into a 4x4. The Blue Knights camper struggled and every nail he hit kept bending. The harder he tried the quicker it would bend. After a few minutes of trying, the Red Dragons were now caught up and it was hammer vs. hammer. The Red Dragon camper came in strong and confident and drove the very first nail he tried in on the first try. Off went the Red Dragons to ring the victory bell in the dining hall. The Knights finished about 6 minutes behind red. Both teams earn points for this gigantic event, but the Red Dragons hold the title of champions until 2023. This is truly an incredible event to witness! 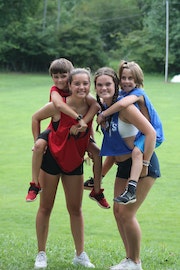 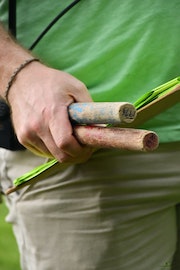 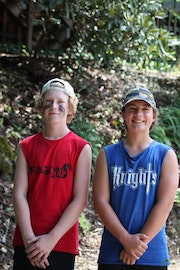 A huge rainstorm hit right in the middle of dinner around 6:15. We were hoping that it would be short lived, but the radar was calling for storms until 8:00. Bryan, Mac and I stood at the front of the dining hall and saw 450 very tired faces staring back at us. At that moment, we decided that this rainstorm was a gift, a reminder to slow down and rest in order to truly enjoy the gift. We sent all of the campers and staff back up to their cabins for an evening rest before our EP would start after the storm. Color War is exciting, but exhausting, and rest was just what we all needed!

Thunder struck at 7:55 which meant we could not start Water Wars until 8:30. And that is just what we did. Rested and fired up, the teams met for a brief spirit meeting before Water Wars and came down cheering and chanting for their Dragons or Knights.

Water Wars was so fun, and the Red Dragons came out victorious in the end. Immediately following Water Wars, we all went down to the field for rope burning. The rope burners and wood collectors had covered their wood during the storm, hoping for enough dry wood to catch a flame. After about five minutes, RED got a flame, but then it went out. Then around minute 7 BLUE got the wood burning and then it went out. The campers were getting very frustrated and so were the coaches. After 12 minutes of trying to get a flame, the Green Giants called the event and postponed it for tomorrow morning after breakfast. It was 10:15 at night. Everyone was tired, and there was just too much moisture in the air for the fire to catch. The campers were relieved. They were tired and felt like a good night’s sleep would make everything better tomorrow.

Tomorrow is the last day of Color War, with two very important events that will determine the fate of this competition. Day four is reserved for the final programs for both teams. The final program includes a play that is written, cast and directed by the staff, but is performed by the campers for the opposite team. Rope burning will be immediately following breakfast, with the final programs to follow. The 2022 winner will be announced before lunch.

This is a close race, and it is really anyone’s war to win. Usually people think that the war is won in the EP events, but the small events add up to be so much more than the points of a big EP. The work each and every camper puts into their event every day is so critical to the outcome. I am so proud of all the hard work from our campers and staff over the last three days. It has been an incredible war for everyone! We are very excited to see how this will end.

Favorite Details of the Day 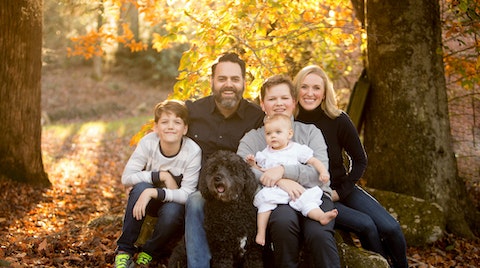 Melissa joined the Highlander family in 2002 and has served in a variety of roles, most recently becoming camp director in 2016 and camp owner in 2019. She lives on camp year-round with her husband (and fellow camp director/owner) Bryan, their rambunctious children - Charlie, Carter and Catherine - and their beloved family dog, Roux.